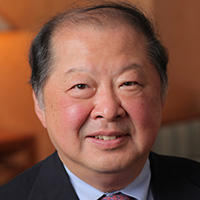 Dr. Chang received a B.S. degree from the Massachusetts Institute of Technology, a M.S. from the University of Pennsylvania, and completed his M.D. degree at the Vagelos College of Physicians and Surgeons of Columbia University. After a vitreoretinal surgery fellowship at the Bascom Palmer Eye Institute, Dr. Chang joined the faculty of Department of Ophthalmology at Cornell University Medical School, where he became Professor of Ophthalmology. Appointed the Edward S. Harkness Professor and Chairman of the Department of Ophthalmology in 1995, he served as director of the Edward S. Harkness Eye Institute until 2012.

Dr. Chang has developed and pioneered several revolutionary surgical approaches to treat complicated forms of retinal detachment, improving outcomes for patients worldwide. He was the first to use perfluoropropane (C3F8) gas in the management of retinal detachments caused by scar tissue growth (PVR) on the retina. This gas is the most frequently used gas in complex vitreoretinal surgeries. He developed perfluorocarbon liquids, a 'heavy liquid' used in flattening retinal detachment, and changed the management of giant retinal tears and retinal detachments resulting from trauma globally. In collaboration with Avi Grinblat, he developed a panoramic viewing system and led in the worldwide adaptation by retina surgeons to this technique. Through research and innovation, he continues to improve the clinical outcomes for patients. He is the recipient of several honors including the Herman Wacker Prize from the Club Jules Gonin, Helmerich Prize from the American Society of Retina Specialists, the Lifetime Achievement Award and the Secretariat Award from the American Academy of Ophthalmology, the Edward Jackson Lecture, the Charles Schepens Lecture, the Donald M Gass Lecture, and the Jules Gonin Medal from the International Council of Ophthalmology. Consistently named as one of America's best doctors, Dr. Chang was also recognized as one of three physicians selected as National Physician of the Year by the Castle Connolly Guides in 2008.