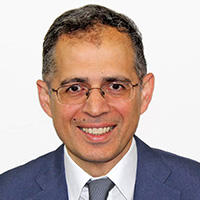 I am a board-certified pediatric pulmonologist and sleep medicine specialist, with extensive experience in cystic fibrosis, asthma, and global health. My deep passion for correcting health disparities globally and in populations affected by asthma and cystic fibrosis regionally is strongly rooted in my upbringing. My father was a New York-trained pediatrician, and a supportive and motivating role model who shaped my life-changing commitment to community service. As a result, following medical training, pediatric specialty training, and pediatric pulmonary subspecialty training in the United States, I was committed to serve the underserved from afar.

I have had the privilege of working with the pediatric pulmonary team at Columbia University Irving Medical Center (CUIMC) since 2000. My early years at CUIMC were influenced by Professor Robert (Bob) Mellins until his passing in 2012.

While working in Stamford Hospital in Stamford, Connecticut during the last year of my pulmonary fellowship, I became acutely aware of the underserved needs of a sick pediatric population in southern Connecticut that, for various reasons, did not have access to care. I established a pulmonary practice in this region and became engaged in program development in three main areas: cystic fibrosis, asthma and global health. I also established a cystic fibrosis care clinic in Stamford Hospital, which led to my current position as the director of the Sue and John L. Weinberg Cystic Fibrosis Center at Columbia.